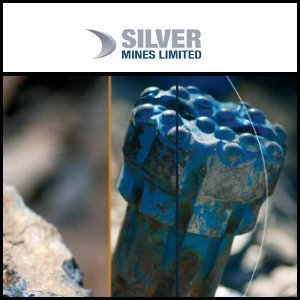 ASX:SVL) has identified numerous new targets associated with silver rich polymetallic mineralisation at its 100% owned Exploration Licenses 6771 and 6114 in New South Wales. Silver values in rock chips up to 2,950 g/t, copper to 1.7%, lead to 15.1% and zinc to 28.9% were returned. Silver rich mineralised zones potentially up to 20m wide have been identified. The Company plans to commence additional follow-up work to extend the mineralisation.

TSE:IVW), has completed the Minimum Obligation expenditure of A$2 million at the Prairie Downs Base Metals Project within 12 months since a Joint Venture Agreement was signed between Prairie and Ivernia in June 2010. During the 12 month period Ivernia has completed two drilling campaigns at the Project and confirmed high grade zinc-lead-silver mineralisation and the presence of a large mineralised system. Under the terms of the Joint Venture Agreement, Ivernia may eventually acquire up to 80% interest in the Project from Prairie.

ASX:AQC) has commenced drilling in the north east section of the Cooroorah coal project. Four holes are planned to be drilled to provide samples for wash plant and coal quality test work. The Cooroorah project is expected to produce metallurgical quality coal.

ASX:MHL) has executed a binding agreement to acquire a 20% interest in the Matagorda oil and gas project located in Matagorda County, Texas, USA. The project is estimated to contain prospective resources of over 1 TCF of gas and 10 MMbo of oil.