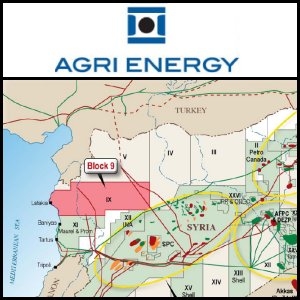 ASX:AAE) has commenced drilling operations in Syria with the spud of Itheria-1, the first exploration well being drilled on the prospective Block 9. The Bashaer well will be the second well to be drilled after Itheria-1, and the two wells have a combined reserves of over 500 million barrels of oil equivalent.

ASX:PPP) said today that preliminary assessment of the reserves of the Tui oil fields indicates that 40-42 MMbbls can be produced from the existing infrastructure. The Tui oil fields have proved a very successful project, and total production at end June was 30.1 MMbbls, net 3 MMbbls to Pan Pacific Petroleum.

ASX:NSE) has been awarded a Special Prospecting Authority for the Seven Lakes area in the Canning Basin in Western Australia, and Green Rock has the right to a 40% in any Exploration Permit taken up as a result of the SPA. Seven Lakes SPA contains prospective unconventional gas resources.

BOM:500251), a fashion retail company part of the Indian conglomerate Tata Group, have reached an agreement for the entry of the Massimo Dutti in the country through a joint venture wherein Inditex will hold a 51% stake.