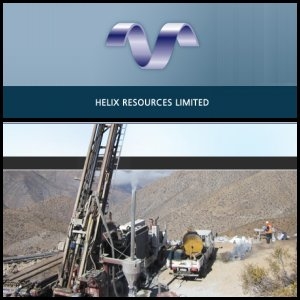 ASX:HLX) reported outstanding assay results from its initial drilling on the Joshua Project in Chile. Drilling has discovered significant zones of copper and gold mineralisation and indicated the presence of zones with higher copper grades of more than 0.5%. The Company will review survey data to identify the full extent of the new discovery and prioritise its next phase of drilling. The Project has an Exploration target of 400 million tonnes.

ASX:BRW) has extended the polymetallic mineralisation at the Surprise Ridge target, part of its 100%-owned Eloise Exploration Project in North-West Queensland, where exploration is gathering momentum on a number of fronts. Further significant copper, zinc and gold results were returned down-dip of existing mineralisation at Surprise Ridge. The company will commence additional drilling to confirm whether potential exists to further extend the existing mineralisation.

ASX:AMX) has received exciting initial drill results from the Foumbiri gold prospect on its 100%-owned Batie West Project in Burkina Faso. Best results included 23 metres at 2.9 g/t gold. To date, Ampella has identified an interim 2.2 million ounces of gold JORC Code Compliant Resource at the Konkera Prospect within the Project. Initial drilling across the Foumbiri prospect represents the first of five substantial regional drill programs completed away from the large Konkera Prospect.

BOM:500325) has received Indian government's approval for its deal with BP (

LON:BP), under which BP will take 30% stake in 21 oil and gas productions sharing contracts that Reliance operates in India. Following the approval, Reliance and BP will work together to conclude the deal, which will result in the largest foreign investment in India's domestic hydrocarbon sector.