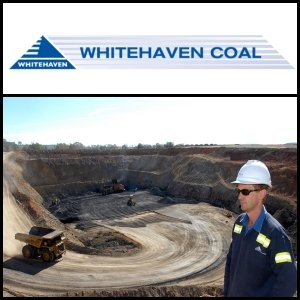 ASX:WHC) said today that its Total Coal Resources have increased in the past half year from 1,750 Mt to 1,771.5 Mt, while Marketable Coal Reserves have increased from 365.7 Mt to 426.1 Mt. The Company has commenced a drilling program at the Vickery Coal Project in New South Wales, with an aim to bringing more coal resources to the Recoverable Reserve category.

ASX:AKI) has received the first batch of assay results from the 2011 drilling campaign at its 80% owned Mayoko Iron Ore Project in Congo. Results have confirmed the thickness of the direct shipping iron ore resources with grades of 50-60% Fe. The Company is preparing an interim JORC resource update to include results from the 2010/2011 drilling program.

ASX:MML) announces the annual update of the JORC compliant Ore Reserve estimation for the Co-O Mine. The Probable Reserve as at 30 June 2011, now stands at 502,000 ounces of gold. The Company expects to maintain an annual mine reserve of approximately 500,000 ounces and to extend the mine life for many years to come.

ASX:GCY) has completed the re-estimation of its 100% owned Glenburgh project in Western Australia, incorporating results of Stage 1 drilling completed in May-June 2011. The Inferred Mineral Resource now stands at 13.8 Mt at 1.2 g/t Au for 520,000 oz of contained gold. Drilling is continuing on site, focusing on extensional resource drilling of the recently discovered Torino Prospect.

BOM:500376), a leading global consulting and IT services provider, has announced the inauguration of its near shore delivery centre in Netherlands. The company envisages a robust growth trajectory in the Benelux region and underlines the importance of local presence in optimally serving its customers. In addition to its new presence in Netherlands, the Company has already established development and delivery centres in England, Northern Ireland and Germany.