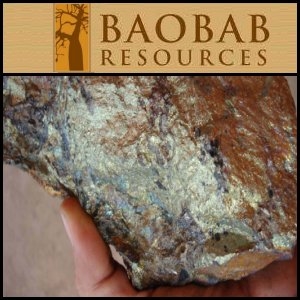 LON:BAO) is an iron ore, base and precious metals explorer with a portfolio of exploration projects in Mozambique. The Company is pleased to present an update of activities at the Massamba Group iron / vanadium / titanium project where a 160Mt resource upgrade was announced on 30 August 2011, the first of three resource statement updates expected before the end of 2011. The Company continues to target a resource base of 300Mt of iron ore by the end of 2011.

- Further positive results returned from the latest round of Ruoni North analytical data are consistent with those announced previously.

Commenting today, Ben James, Baobab's Managing Director, said: "The latest round of results confirms the robust continuity of mineralisation at the Ruoni North prospect. The Company looks forward to releasing further results from Ruoni North and South in the lead up to their respective resource statements."

Tenge/Ruoni is the easternmost prospect area of the Massamba Group. Drilling at Tenge/Ruoni is progressing rapidly and has intersected a heavily mineralised package varying in thickness from 60m to 150m. Mineralisation has been synformally folded with the fold hinge plunging gently to the west-northwest. Exploration campaigns in the prospect area have been divided into three resource blocks:

- Ruoni North: representing 1km of strike along the northern limb of the fold. Thirty reverse circulation (RC) and diamond holes have been completed to date across seven traverses for an aggregate total of 5,750m. Drilling has intersected a substantial package of mineralisation from surface dipping at 25 degree to 50 degree to the southwest.

- Ruoni South: representing 1.2km of strike along the southern limb of the fold. Twenty seven RC and diamond holes have been completed for an aggregate total of 5,200m. Mineralisation in the Ruoni South area is generally steeper dipping (c.65 degree to the north).

Analytical results for RC holes RNRC0001 to 5 were announced on 7 September 2011. Further results from holes RNRC0007 to RNRC0012, 14 and 17, drilled over three cross sections spaced between 120m and 180m apart at Ruoni North, have been returned. Sample preparation at 1m composite intervals was completed by ACT-UIS laboratories in Tete, Mozambique prior to despatch to ALS Chemex laboratories in Perth, Western Australia for further compositing (maximum composite length of 6m), Davis Tube Recovery (DTR) and X-ray Fluorescence Spectrometry (XRF) analysis.

Drill hole collar details and significant intercepts are tabulated below (see link at the bottom of the release). The results are in line with those announced previously and demonstrate an overall improvement in Fe head grades and mass recoveries. The average Fe concentrate grade is lower and V2O5 and TiO2 higher than reported in the other Massamba group resource blocks, but remains within a typical saleable range for titano-magnetite concentrate. Metallurgical test work is on-going to determine the best grind fraction/magnetic strength conditions to optimise the concentrate quality. Baobab will also be conducting studies into blending the various concentrate streams to further enhance the finished product.

ASX:RIO) mega coal projects. The project is strategically located to access abundant, low tariff hydro-electric power from existing and developing schemes on the Zambezi River. The ports of Beira and Nacala are being refurbished, as are the rail corridors through to Tete.

The project contains two areas of titano-magnetite / ilmenite mineralisation; the Singore area to the south and the Massamba Group trend in the north. The Massamba Group is composed of a series of five prospects (Chitongue Grande, Pequeno, Caangua, Chimbala and South Zone) forming an 8km long trend and the 3.5km long Tenge / Ruoni prospect to the east.

The Company commenced exploration initiatives in mid 2008 and has focused its efforts to date on the Massamba Group area. The Singore area remains largely untested, but highly prospective.

Independent scoping metallurgical studies and financial modelling completed in 2009 indicate positive project economics in the production of high quality titano-magnetite/vanadium and ilmenite (titanium) concentrate commodities from a resource base of 300Mt.

A scout drilling programme, designed to assess the Chimbala and South Zone prospects of the Massamba Group trend, has been completed during 2010 for an aggregate total of approximately 7,500m. The purpose of the campaign has been two-fold: to improve confidence in the Company's Exploration Target and to clarify geological domains for continued metallurgical test-work.

South Zone was prioritised for resource drilling and the Company announced an 113Mt JORC Inferred Mineral Resource on 30 August 2011. The resource remains open at depth and along strike.

As well as completing the resource drilling at South Zone and Tenge/Ruoni, an expansion resource drilling campaign at Chitongue Grande has been completed with thirty six RC holes drilled for an aggregate total of 6,275m. Down dip and along strike projections of the existing resource have been intersected. All samples have arrived at the ALS laboratory in Australia. Consultant, Coffey Mining Pty Ltd, has commenced preliminary data validation and geological modelling in preparation for a resource update scheduled for release in October / November 2011.

For the complete Baobab Resources announcement including figures and tables, please view the following link:
http://media.abnnewswire.net/media/en/docs/69769-Baobab.pdf