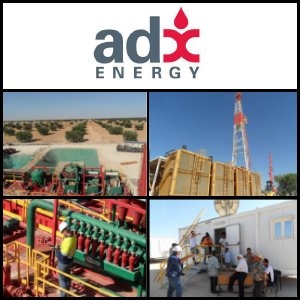 OTCMKTS:ADXRF) advised at the time of the Independent Resources Assessment on the 17th of February 2016 over Nilde Area (incorporating the previously produced Nilde oil Field, the adjacent Nilde Bis discovery and two other discoveries in the D 363 CR.AX permit) that it intended to concentrate its efforts on defining a potential oil development project incorporating the Nilde and Nilde Bis resources.

Following the announcement of 34 Million Barrels of 2C Contingent Resources independently assessed by Senergy (GB) Limited ("Senergy") on the 17th of February 2016, ADX has progressed project definition work on the (100% owned) potential development of the Nilde and Nilde Bis fields. Key outcomes of the work are summarised as follows:

- Geological model development based on additional well data acquired from ENI (The Italian National Oil Company) supporting the oil in place estimates calculated by Senergy and providing the starting point for future production forecasting and reserves calculation which will be generated via reservoir simulation,

- Indicative cost estimates based on current rates for Floating, Production, Storage and Offloading systems (FPSO) and drilling rigs suitable for the development of Nilde and Nilde Bis which indicate a low capital cost per barrel ˜ US$ 7 per barrel based on 2C resources case,

- Mapping of 5 exploration leads defined with existing 2D seismic in the D 363 CR.AX permit with a total best estimate prospective resources of 90 million barrels of oil.

This update summarises the recent progress made in defining the project with the stated objective of declaring reserves by the end of 2016 and further confirms the substantial value potential of this project and its potential viability even at low oil prices based on expected costs, proven highly productive reservoirs and attractive fiscal terms.

As discussed previously based on geological, engineering studies and observed historical production trends, ADX and the independent geotechnical consultant Senergy, believe the Nilde field was prematurely abandoned in 1989 due to an oil price collapse and an increase in water cut that occurred due to poor reservoir management. The increase in water production could not be handled in the relatively primitive facilities at the time compared to current technologies due to a lack of artificial lift for wells and water separation facilities on the early generation FPSO.

The additional data has been incorporated into the ADX field data base and used to build a detailed 3D geological model which will be used for reservoir simulation work enabling a history match of past production to develop confidence in the interpretation of the reservoirs architecture and flow mechanism. In predictive mode the reservoir simulation model will be used to optimise development wells for maximum oil recoveries.

The geological model developed by ADX supports the estimated volumetric STOIIP (stock tank oil initially in place) independently verified by Senergy and in addition to that has highlighted areas with potential upside in terms of reservoir quality, such as porosity which is directly related to in place reserve. The two figures below are examples of the 3D structural model and a cross section of the porosity model for illustration purposes, respectively. As stated above these models will be the starting point for future reservoir simulation and a range of new oil in place calculations.

ADX has been working closely with a number of contractors and industry advisors to determine realistic capital cost estimates for the potential development of the Nilde and Nilde Bis fields.

The indicative economics summarised in this report is based on a FPSO development option which may not be the optimal cost outcome but is a solution that is readily available and can easily be bench marked with other comparable projects. Nilde and Nilde Bis benefits from the relative simplicity of the project that lends itself to generic production solutions due to the simple nature of producing low wax high API Oil. Leasing an FPSO facility is common place in the industry and greater number of facilities are now becoming available for reutilisation at potentially very attractive lease rates due to the abandonment of high cost fields.

In this analysis we have assumed the conversion of an existing tanker to an FPSO based on known costs that can be reliably bench marked rather than a leased solution which may provide a cost windfall in the current environment. The economics assumes a build own operate scenario rather than optimised lease.

The current status of the oil and gas industry should provide ADX with further cost benefits given the trends in drilling costs, construction costs and FPSO utilisation rates.

The indicative economics scenarios assume first production in 2019 which is conservative for this project and is really a function of funding constraints while ADX develops confidence in the project rather than physical schedule limitations.

A breakdown of estimated appraisal, development drilling and production facilities costs is shown in the link below in US$.

Funding alternatives for a company with a relatively small capitalisation such as ADX will be critical as the company progresses through the development cycle.

The potential funding alternatives for the Nilde project are as follows:

2. Seismic and appraisal drilling >> equity funding OR industry farm out OR contractor drilling for equity

3. Development drilling >> debt and equity funding OR industry farm out OR contractor drill for equity OR production sharing loan with oil trader

As a result of the favourable sea conditions in the Mediterranean Sea, shallow drill depths, moderate to shallow water depths and highly productive reservoirs yielding high recoveries per well the expected capital costs per barrel for the project are very attractive for an offshore development. This is expected to lead to a project that is economic at low oil prices and very attractive at oil prices exceeding US$ 40 per barrel.

The following fiscal terms apply to production in Italian waters.

- An inflation rate of 1.5% has been assumed in the following economics estimates for all scenarios.

The following economics summary is based on the above mentioned capital costs, production and fiscal assumptions as well as the following development assumptions:

- Development of Nilde and Nilde Bis only

The plot of Post Tax Net Present Value for a discount factor of 10% indicates a potential Nilde and Nilde Bis only development is robust for both the 1C and 2C resources cases at low oil prices and the project is potentially very valuable in the context of ADX market capitalisation at oil prices above US$ 40 per barrel.

The profit investment ratio PIR (NPV/CAPEX) which is a measure of investment efficiency is 0.8 and 1.7 respectively for the 1C and 2C resource cases at an oil price of US$ 40 per barrel. The PIR for the project would increase substantially for a leased FPSO option which is likely for this type of development.

A summary of key points regarding project resources, production, cost and economic attributes are as follows:

- Indicative economics for the project demonstrate high profitability at oil prices above US$ 40 per barrel and commercial viability below US$ 30 per barrel for both 1C and 2C resource cases.

Exploration Potential of the Nilde Area

While ADX intends to concentrate its efforts on the commercialisation of the Nilde and Nilde Bis fields in the short term the availability of near field exploration potential significantly enhances the opportunity for investors or potential farm in partners.

ENI made the Norma and Naila oil discoveries subsequent to the Nilde-1 Bis (1973) and Nilde-2 (1976) discoveries. These discoveries were tested but never developed. They do however demonstrate oil charge and the presence of productive reservoirs across the permit. With the oil price collapse and the shut in of Nilde in 1989 all drilling activity ceased. ENI however continued to acquire high quality 2D seismic until 1991 which has enabled ADX to assess the potential of a number of well defined, undrilled, anticlinal structures analogous to Nilde.

In addition to the Nilde and Nilde Bis oil field work outlined above ADX has undertaken an evaluation of the near field exploration potential. The location of the currently highest ranked leads and their resource potential are shown below in Figure 1 and 2 in link below respectively. 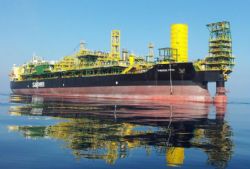