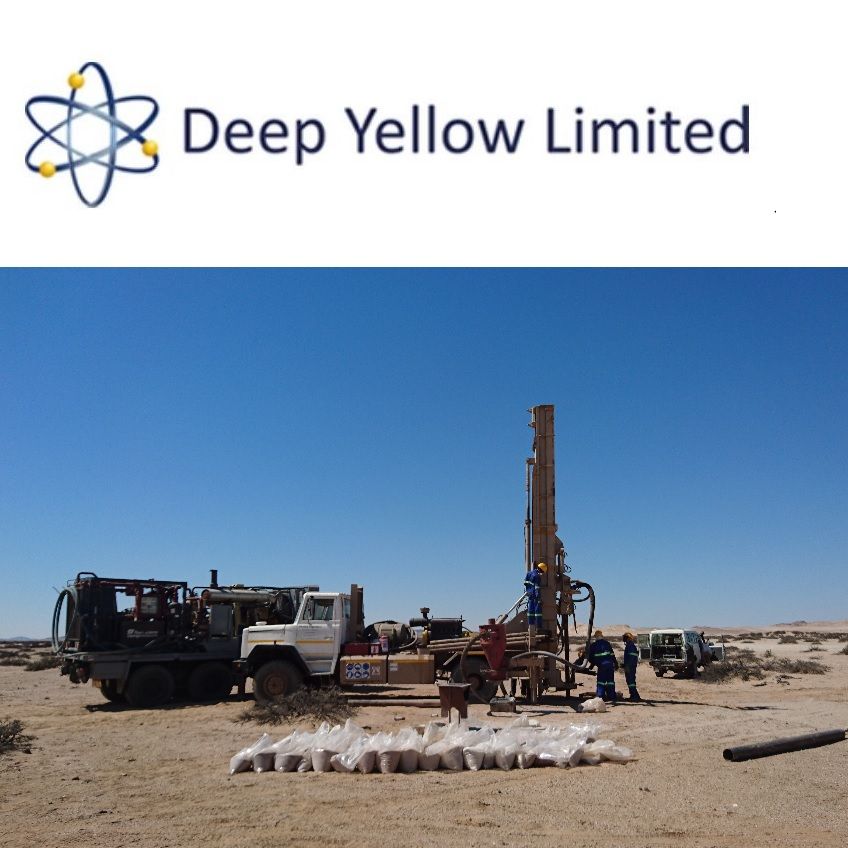 OTCMKTS:DYLLF) (Deep Yellow) is pleased to announce that the resource infill drilling in the Tumas 3 West area, testing a southern palaeochannel tributary was completed. In addition a short exploration program in the Tumas Central palaeochannel commenced and stopped due to the Christmas break. Drilling will resume in February 2019 to complete this work. Uranium mineralisation has been confirmed within the tributary channel and in the area explored at Tumas Central. EPL 3496, within which this drilling occurred is held by Reptile Uranium Namibia (Pty) Ltd, part of the group of companies wholly owned by Deep Yellow.

o 2.2km of continuously mineralised channel identified will now be considered for inclusion in the forthcoming resource estimation work.

- Encouraging exploration drilling results 6km to the NW of Tumas 3 deposit where testing started on the Tumas Central palaeochannel with 8 holes and will resume in February 2019.

- A new Mineral Resource Estimate for Tumas 1 East and Tumas 3 West is expected in Q1 2019.

- Mineralisation is calcrete-associated hosted within palaeochannels, similar to the Langer Heinrich uranium mine located 30km to the north.

Since the last drilling update (as reported 28 November 2018) 89 holes have been drilled from 23 November to 15 December 2018 for 2837m. This completed the resource definition drilling on a tributary in the Tumas 3 West area with exploration drilling starting in the central section of the main Tumas palaeochannel (Tumas Central).

This work marks the completion of the 2018 drilling campaign. Figure 1 (see link below) shows the prospective paleochannel system outline and prospect locations.

81 RC holes involving 2,499m of drilling has been completed for the resource definition drilling over a tributary channel entering the main Tumas palaeochannel from the South.

The mineralised channel that has been identified is between 100m to 500m wide and 2.2km long. The mineralisation is situated in a zone ranging from 5 to 30m below surface. None of this mineralisation shows any surface radiometric expression.

Drill hole and channel locations are shown in Figure 2 (see link below). Figure 3 (see link below) shows a drill cross-section through the tributary indicating the continuity and thickness of mineralisation.

Mineralised intersections from the current reporting period that are above the 100ppm U3O8 over 1m cut-off are tabulated in Table 1, Appendix 1. Table 2 in Appendix 1 lists all holes drilled in this period. The equivalent uranium values are based on down-hole radiometric gamma logging carried out by a fully calibrated Aus-Log gamma logging system.

8 RC holes involving 338m have been completed in the Tumas Central palaeochannel, 6km NW of the current Tumas 3 deposit (Fig 2 NW corner). Testing of this area is incomplete as drilling had to be suspended due to the Christmas break. The area is one of the seven semiregional exploration targets which were identified early in the year but this particular priority zone could not be tested previously due to access problems which has now been resolved. The area covers the confluence of two channels and shows some surface radiometric anomalism over the main palaeochannel.

Two short lines were drilled across the channel with exploration drill hole spacings of 200m along the lines. Uranium mineralisation was encountered on all cross-lines. Four of the eight exploratory drill holes showed uranium mineralisation greater than 100ppm eU3O8 over 1m. The average grade of which was 227ppm.

Figure 2 (see link below) shows the exploration drill hole locations in relation to the Tumas 3 discovery and the Tumas 3 West drilling.

The resource infill drilling has been successful, confirming the presence of 2.2km of continuously mineralised palaeochannel. Including previous exploration drilling, in total, 247 RC holes for 7,100m were completed over the Tumas 3 West Southern tributary. The results will now be included in a new Mineral Resource Estimate expected to be completed in early 2019.

Drill spacings used have varied from 50m to 100m along lines 100m apart. Of these holes, 85 or 35% returned positive results of more than 100ppm eU3O8 over 1m. The average grade of the 1m intersections >200ppm U3O8 cut-off as used in the previous Mineral Resource Estimates is 399ppm. The average thickness is close to 4m.

The results of the ongoing exploration are regarded as very encouraging. This drilling of the previously unexplored, central part of the Tumas palaeochannel system again has identified a new calcrete-type uranium mineralisation at shallow depth which will require further exploration drilling to define the possibility of economic accumulations.

Significantly, the new uranium mineralisation identified at Tumas Central has opened the potential for further mineralisation within the central part of the main palaeochannel along an extensive strike length.

The ongoing work again confirms that the uranium mineralisation is not confined to one simple, single channel but rather is associated with a complex palaeodrainage system containing several channels and tributaries.

This fourth drilling campaign once again has emphasised the strong exploration potential of the extensive, uranium-fertile palaeochannel system within which the new Tumas palaeochannel discoveries occur.

An updated Inferred Mineral Resource Estimate for the Tumas 1 East Zone, in conjunction with Tumas 1 & 2 and Tumas 3 West is expected to be delivered in early 2019.

John Borshoff commented: "This latest drilling on the Reptile Project which marks the end of the CY2018 drilling campaign has finished on a high note with identification of yet another mineralised tributary paleochannel and identification of a new zone of interest in the Tumas Central area. The positive results from the southern tributary channel will not only add to our growing palaeochannel resource base but confirms the very high exploration potential of the Tumas palaeochannel system which will continue to be the focus of activity for 2019." 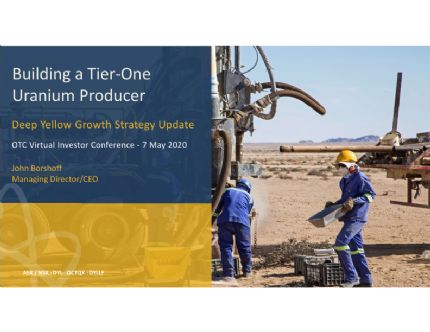