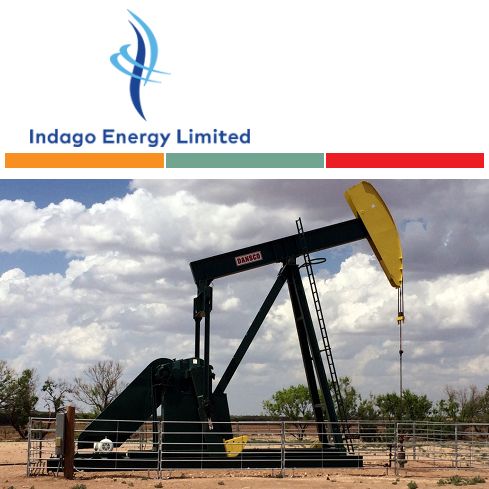 OTCMKTS:POGLY) is pleased to provide the Company's Quarterly Activities and Cashflow Report.

- Indago signs agreements for the acquisition of Hydrocarbon Dynamics

- Indago identifies projects on which to trial HCD technology

Indago ('INK' or 'the Company') has today signed a Share Purchase Agreement to acquire the Hong Kong based HCDI Holdings Ltd, its related companies and associated Intellectual Property (collectively "the Companies"). Details of the Companies are contained at http://www.hydrocarbondynamics.com.

Together the Companies own an exceptional new oil technology and business that allows for the swift, clean and cost effective treatment of heavy, asphaltenic and paraffinic oils.

The key product, HCD MultiflowTM comprises small, specially engineered carbon-based organic molecules that can disaggregate the large, naturally occurring agglomerations of waxes and asphaltenes in heavy or paraffinic oil. Once disaggregated, these agglomerations are reabsorbed into the crude oil, reducing its pour point, viscosity and increasing API gravity thus providing outstanding flow assurance and transfer system efficiency. The HCD MultiflowTM molecule can also separate water and sediment from the crude oil and the product will have far-reaching applications in the productibility and transport of heavy/paraffinic crudes, as already evidenced by the product's use in a large offshore oil field and with many successful trials to its credit.

There are a range of conditions precedent and subsequent to completion of the proposed transaction including respective shareholder approvals of both Indago and HCD and regulatory approvals. These conditions also include various completion related documentation and processes. Indago will now prepare detailed information on the HCD acquisitions that will be sent to shareholders for their consideration expected to be distributed in Feb 2017 with a meeting expected to be held in March 2017. Indago cautions that there remains a risk that the transaction will not be completed.

In a staged transaction and subject to the various conditions, Indago will initially pay ~A$1m in cash or assumed liabilities plus 50 million fully paid shares and 33.2 million options (exercisable at $0.25c for two years). Of the 50 million shares, 20 million will be withheld pending either the re-instatement of drum sales to Malaysia or a new contract is entered into for drum sales of roughly the same amount (note this is a change from the MOU terms where the full 50 million shares were to be issued on completion). Subject to certain EBITDA hurdles being met, Indago may issue up to a further 30 million shares in April/May 2018 and 50 million shares in April/May 2019. To secure ownership of the Intellectual Property Indago will also pay a royalty of 5% of net sales to inventor Nick Castellano until those payments total US$20m. The royalty is also subject to a US$20,000/month minimum (once the Malaysian contract has been replaced). Further details will, once finalised, be disclosed in more detail in the Notice of Meeting to shareholders.

The staged payment of the 50 million shares has been introduced due to the fact that sales arrangements to Malaysia have ceased since the MOU was signed and there is no certainty that they will resume in 2017. Indago and HCD have therefore agreed to withhold 20 million shares pending the re-instatement of these sales arrangements or replacement sales of a similar quantum within 3 months of the completion of the acquisition.

As foreshadowed in the initial announcement, Indago has financed approximately US$400,000 worth of product inventory for HCD to sell to potential customers to enable the Companies to deliver product orders. Indago shareholders will however receive the sale proceeds from this product whether or not the merger completes.

Two representatives (the MOU envisaged three) from HCD will initially, subject to shareholder approval, join the INK board and will include the founder and inventor of the technology, Nick Castellano, along with HCD's Managing Director Allan Ritchie. Both will fulfil Executive Director roles.

The technology is proven, however is at an early stage of application in the industry with revenues of around A$1.2m in 2016 where HCD MultiflowTM was being used by Malaysia's national oil company, Petronas, successfully for 4 years on a major offshore platform and pipeline system. These sales have not resumed in 2017 while an alternate product is tested in an attempt to reduce costs. It should also be noted that sufficient stocks of Multiflow are on hand in Malaysia to resume sales quickly if required.

Early encouraging and reproducible results have been reported in trials at a major oilfield in India where Multiflow has been applied. Test work is also scheduled for Brazil later in the year as well as new projects identified by Indago in North America.

During the Quarter there were no new developments at the Company's Newkirk project where Indago holds a 100% WI and 81.25% NRI in 4,049 acres located in Kay County, Oklahoma near Ponca City. The leases were largely acquired during 2015 with a three year primary term and two year bonus term. The project is located within the Mississippi Lime tight oil play, a relatively mature play in which hundreds of wells have been drilled in the past decade.

ASX:EEG) suggested in a corporate presentation that they are considering a 2 well appraisal programme at Newkirk in the March Quarter, though no formal proposal has been presented to Indago. In EEG's presentation, they suggest well costs are expected to be US$375,000 to drill and complete. Indago had earlier estimated well costs at US$500,000 and net recoverable reserves/well expected to average ~30 Mstb oil and 200 MMscf gas.

As reported previously, the main target Mississippian Lime (MSSP) is a carbonate formation which underlies a large portion of northern Oklahoma and southern Kansas. The play lies at shallow depth of 1200-2200m (4000-7000') and is about 100m (300') thick. Oil & gas is sourced from the underlying, highly prolific Woodford shale.

Both MSSP resevoirs have been the focus of drilling and fracture simulated completions employing vertical wells since the 1940's and horizontals since 2007. Initial flow rates for vertical wells average ~45 stb/d oil and ~80 Mscf/d gas. For horizontals, initial flow rates are highly variable dependant on how many 'sweet spots' are encountered. Wells produce significant salt water with low oil cuts, typically 10:1. Consequently, salt water disposal/injection (SWD) is an important consideration at the Newkirk Project.

As reported last quarter, the prospectivity review concluded that Indago's leases are prospective for oil and gas but given the paucity of modern wells in the immediate vicinity of Newkirk, the project should be appraised with 2-4 wells prior to development. Should the appraisal programme confirm typical play production and recovery characteristics, the project would present an attractive development when US domestic oil prices approach US$60/bbl.

Indago is currently awaiting a proposed work programme from the Operator. Initial joint venture discussions revolved around a two well work programme to test the key characteristics of the play. It should be noted that some of Indago's leases begin to expire in 2017.

Oil and gas leases held by Indago are contiguous with an additional 4,936 acres held by EEG. Under a Joint Operating Agreement, the two companies have agreed to the further development of the combined acreage (8,985 acres) on a 50/50 basis.

At December 31st , Indago Energy had cash resources of $3.65 million after providing HCD with ~A$525,000 (US$400,000) for the production of its main product, Multiflow, as described above. For clarity, should the acquisition not proceed the US$400,00 will be paid back from product sales. 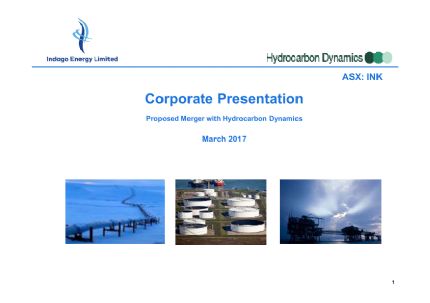