Analysis and interpretation of the new 2D seismic data will be used to optimise the selection of surface drilling locations on EP187 for our 2020 exploration drilling campaign, and ultimately the drilling and completion design for appraisal and development wells as the company moves forward.

In Q3 2019, Empire advised shareholders that its wholly owned subsidiary, Imperial Oil & Gas, had submitted an Environment Management Plan (EMP) for the drilling of up to two wells in EP187 which the Northern Territory Government accepted and which is undergoing formal assessment.

Once approved by the Northern Territory Government, the EMP would remain in place for five years, thereby providing Empire with significant flexibility regarding timing and planning for prospective drilling operations.

The approval process, which is already well underway, is progressing well.

Empire anticipates that it will receive Northern Territory Government approvals for the drilling program in advance of the commencement of the 2020 dry season (early Q2 2020).

Empire will continue to update shareholders as the approval process progresses. 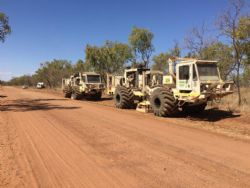